Recognizing that relationships are fundamental to the health and well‐being of individuals, couples, families, and communities, AAMFT exists to advance the profession and the practice of marriage and family therapy. Because we value how systems impact families and communities, AAMFT strongly condemns the invasion of Ukraine that reduces the strength and livelihood of these essential building blocks of society. As violence and displacement threatens to widely impact the region, MFTs stand ready to address the resulting trauma and instability through the provision of essential mental health services.

We stand in solidarity with the Ukrainian people, Ukrainian systemic therapists, and MFTs worldwide who work within Ukrainian communities.

AAMFT is aware of a recent directive from Texas Governor Greg Abbott that constitutes gender-affirming care as child abuse and requires criminal investigation into parents or licensed professionals under mandatory reporting laws.

AAMFT remains clear and vocal in our position against discrimination on any basis, and recognizes the adverse effects of this directive on the livelihood of the transgender and gender diverse community, putting already at-risk individuals at greater risk for depression, increased suicide, and attempted suicide.

“We oppose political action that discriminates against the LGBTQ+ population or seeks to limit MFTs’ ability to provide gender affirmative care. Unfortunately, this directive is just the latest in a concerning trend of anti-transgender efforts in state legislations that AAMFT and our Queer and Trans Advocacy Network will continue to monitor and work in avenues available to us to build a greater understanding about the health and support that evidence-based gender affirming therapy provides,” says AAMFT CEO Tracy Todd, PhD.

AAMFT President Shelley Hanson says, “Marriage and family therapists are integral in supporting and affirming transgender and gender diverse clients throughout their journey of self-discovery, self-acceptance, and transition, and providing the crucial support within their family systems to enable enriching, stable relationships that are fundamental to their well-being.” 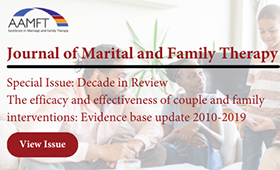 It’s here! We have just launched our new Decade in Review special issue of the Journal of Marital and Family Therapy (JMFT). This once in a decade review is the journal’s fourth special issue. It assesses the efficacy and effectiveness of couple and family therapy by reviewing rigorous studies published over the 10-year period from 2010-2019.

The first 12 articles focus on couple and family interventions for prevailing mental health and behavioral disorders and health conditions. The final article reviews the past decade of research with the goal of assessing progress and identifying areas where advances in research are needed to decrease mental health disparities among racially and ethnically diverse populations.

This review provides the profession with a solid benchmark of the work that has been done, but also an understanding of what has been proven to work well and what areas need more research.
The issue covers the following topics:

Given the importance of this content to the profession, systemic therapists, and society at large, we are pleased to share that all articles in this issue will be available free of charge to members and the general public for one year.