AAMFT has met with Senator Tester's office and will  continue to work with them as the bill moves through the legislative process. We will continue to update  our MFT advocates on any late breaking developments. Thanks to all in the MFT community who made their voice heard in support of these amendments.

Today, July 22, the Senate Committee on Veterans Affairs is marking up (adding amendments) to the 21st Century Veterans Benefits Delivery Act. This is comprehensive legislation designed to create a system that can withstand surges in disability claims without generating another veteran disability claims backlog.

Senator Jon Tester (D-MT) is planning on introducing two amendments that would directly benefit MFTs. One would support ongoing efforts to recruit and integrate more marriage and family therapists  and licensed professional mental health counselors and would also include them as participating professions in the VA Office of Academic Affiliations’ Health Professionals Trainee Program.

WE NEED YOUR VOICE.

Please reach out to members of the Senate Veterans Affairs Committee TODAY and let them know you support Tester’s proposed amendments! The meeting is at 2:30 PM EST. We have included a suggested script below as well as phone numbers for the members of the committee.  Also, please forward to other members of the MFT community!

“Hello. I am a marriage and Family Therapist and I am calling in support of Senator Tester’s amendments to S. 1203, the 21st Century Veterans Benefits Delivery Act that is being marked up in the Senate Committee on Veterans Affairs today.

Specifically I support Tester’s amendments #2 and #3 that would support ongoing efforts to recruit and integrate more licensed professional mental health counselors and marriage and family therapists and would also include them as participating professions in the VA Office of Academic Affiliations’ Health Professionals Trainee Program. “ 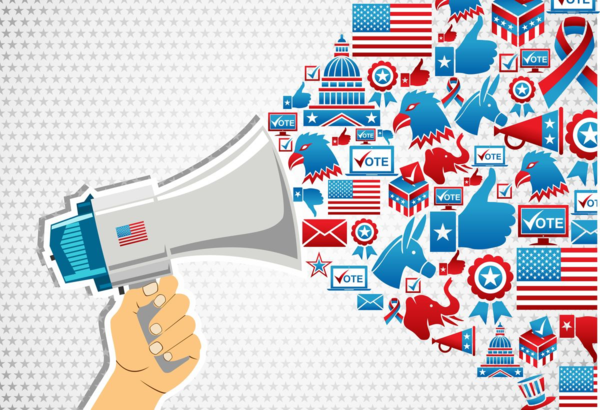 Here are some updates on things happening in Washington that directly affect MFTs:

On June 12, Representative Chris Gibson (R-NY) introduced The Mental Health Access Improvement Act of 2015 (HR 2579). This bill wouldcover marriage and family therapist services and mental health counselor services under Medicare part B. This bipartisan legislation is cosponsored by Representative Mike Thompson (D-CA). AAMFT is working with a coalition of partners, including CAMFT, NBCC, AMHCA and the ACA on a coordinated effort to increase support for the legislation. We are also planning a grassroots push in the next few months to ask AAMFT members to reach out to their legislators and add their voice.  We expect a senate companion bill to be introduced within the next few weeks by Senator Debbie Stabenow (D-MI)

Senator Jon Tester (D-MT) introduced his VA workforce bill the Delivering Opportunities for Care and Services or DOCs for Veterans Act (S. 1676) on June 24.  The bill does a number of positive things for the MFT professions, including:

No Child Left Behind

The bill would reauthorize and strengthen the National Child Traumatic Stress Initiative (NCTSI), a national network of child trauma centers that works with children and families who are exposed to a wide range of traumatic experiences.

The bill would designate the first full week in May as “National Mental Health No Stigma Week”. Approximately one in four adults experience mental illness in a given year (National Institute of Mental Health), yet misconception and misinformation have left many people with mental illness afraid to talk about their experiences or to seek help. By reducing the stigma, we also reduce the barriers to health-seeking behavior and send the message that mental illness is like any other illness.

The bill would prevent child abuse in programs that treat children with emotional, behavioral, developmental, substance abuse, or mental health problems. Boot camps, wilderness programs, behavior modification, and other types of residential programs are often a last-resort treatment option for children and teenagers with major behavioral challenges. Unfortunately, many are subject to little to no accountability to ensure that participants are shielded from abuse.

Recently, Representative Ted Lieu (D-CA) introduced HR 2450 The Therapeutic Fraud Prevention Act. The bill is designed to make it illegal for anyone to offer, for a fee, conversion (or reparative therapy) which tries to change sexual orientation from homosexual to heterosexual. It would do so by having the Federal Trade Commission (FTC) classify it as “fraud” if the service is offered for a fee.

The bill is specifically designed to go after the vast majority of practitioners of this practice who are unlicensed (over 70%).  At the state level, AAMFT has supported efforts to make a licensed mental health practitioner who engages in this practice to be subject to disciplinary action from their provider’s licensing entity.

AAMFT has stated unambiguously that conversion and reparative therapy is a dangerous practice that has no basis in science. AAMFT expects its members to practice based on the best research and clinical evidence available.

Members are also expected to practice in accordance with applicable statutes and regulations; some states have taken steps to prohibit SOCE (sexual orientation change efforts) with minor clients. In addition, all members of AAMFT are bound by the AAMFT Code of Ethics.

While we have concerns with the way the federal bill is structured, AAMFT has met with Rep. Lieu’s staff regarding the legislation and continues to work with them moving forward to strengthen the bill.

For more information on AAMFT’s various positions on couples and families, reparative/conversion therapy and the nonpathologizing of homosexuality, see our Position on Couples.

Between January 1, 2015 and June 30, 2015, AAMFT’s legal and ethics consultation service received approximately 531 inquiries. During that period, the top five most frequently asked about topic categories were: 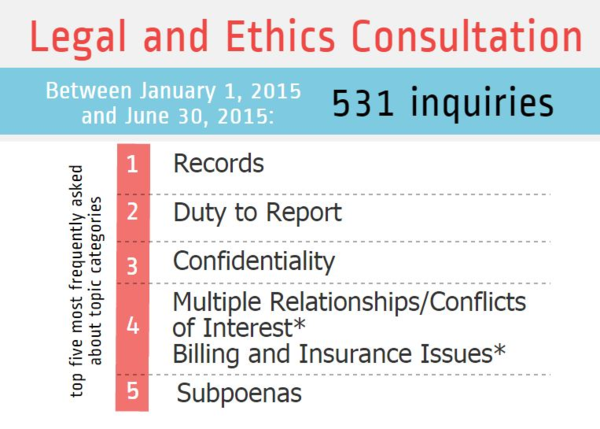 Some of the questions asked included:

Confidentiality- managing confidentiality when there are multiple individuals in a client unit, requests for information from third parties, and client disclosures of past crimes or communicable diseases.

Subpoenas- issues related to confidentiality and privilege, questions about how to proceed when there are multiple individuals in the client unit, and general questions about what to expect in depositions and hearings.

Stay tuned to the AAMFT blog for our Legal and Ethics FAQ Blog Series, which will provide general information on these most frequently asked about topics and questions.

Spirituality and Ethics in Clinical Practice

We are all practicing in an increasingly diverse world, a world that continues to get smaller and push us to be better neighbors. As marriage and family therapists, we have a professional responsibility to acknowledge and understand the cultural identities of our clients, and to integrate those cultural factors into the treatment process. In other words, we have a responsibility to provide culturally competent care. In addition to issues related to race and ethnicity, age, gender, socioeconomic status, and sexual orientation, cultural competence also includes spirituality. Unfortunately, addressing spirituality within the context of clinical practice is oftentimes not given the attention it needs and, as a result, MFTs can feel challenged about how to integrate is ethically and effectively.

This Friday, July 17 at 3:00 PM ET, Robert W. Marrs will host a webinar on Spirituality and Ethics in Clinical Practice, which will take a closer look at the role of spirituality in practice and some of the common ethical challenges facing MFTs. A recorded version of this webinar will also be available on Teneo if you are not able to join us on Friday. Register here.

Robert W. Marrs, MS is a licensed marriage and family therapist, and the Manager of Clinical Services at Aurora Family Service in Milwaukee, WI.; Clinical Fellow, Approved Supervisor, and a Past President of WAMFT; Clinical Instructor at Marquette University, and serves on the ethics committees of two Aurora Health Care hospitals.

The answer to these three questions should NOT be attributed to your client. When stuck, there are four areas about you and your therapy process to examine: theory, attitude, process, and outcome.

Theory. First, examine if your theory about therapy is creating a positive change barrier. If you are more focused on your theory than your client, you are probably not listening well and looking to prove your theory.

Attitude. Is your attitude pathologically or strength based? A pathological attitude can understandably create resistance from clients. An outcome of pathological attitude can be historical intimidation, which can overwhelm you as a therapist. In these situations, ask yourself what is triggering this negative attitude towards your client(s). Then, try to engage in a session devoted to assessing strengths, resilience, and includes future-oriented talk. If you are challenged by historical intimidation and cannot engage in future talk, consider at least peer consultation. Often, therapists claim clients will not engage in strength-based talk. Simply, that’s blaming the client for your stuckness.

Process. Are you spending too much or too little time in process talk? It is also possible that your process talk is not what the client wants processed. The outcome of this dynamic is clients not feeling heard, or feeling hopeless because of little change. If process is a stuck point, then monitor and evaluate your in-session talking points. Process talk is oriented towards feelings, history, and thoughts about the presented problem.

Outcome. Outcome talk is oriented toward actions, change, and tasks. Too much or too little outcome talk can lead to clients not feeling heard or not gaining positive therapy momentum. It is possible that outcome talk is missing the target and clients will be understandably confused or resistant.

As you can see, before labeling clients as resistant or unmotivated, there are many steps to take. 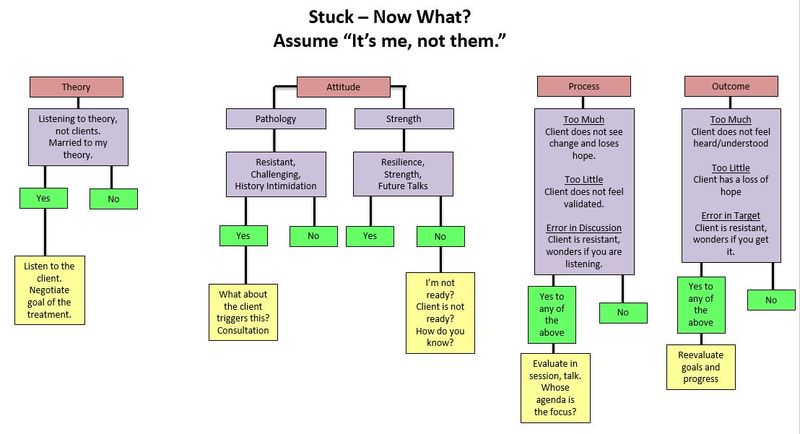 A healthy therapist should possess excellent insight about their own contributions to a stuck therapy situation. As you learn what increases receptivity, do more of it and you will experience fewer stuck cases. 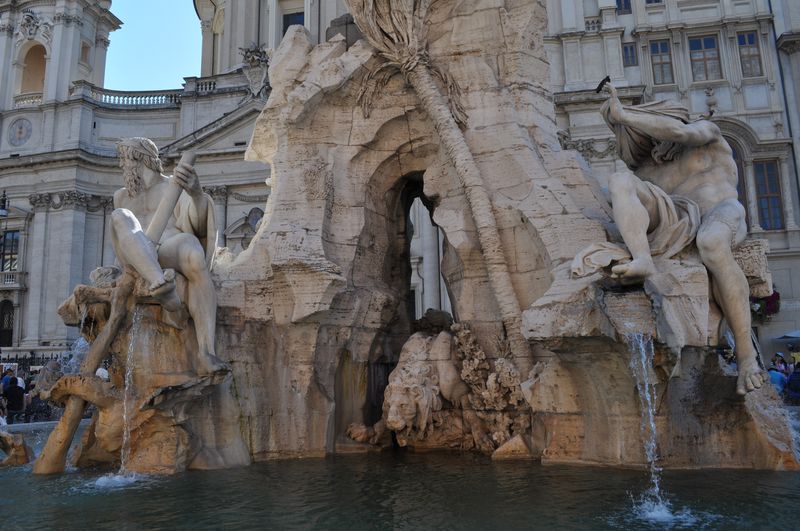 Whether spending time in the session room or strolling through the streets of the city, participants agreed that Rome made for a wonderful setting for the 2015 Institutes for Advanced Clinical Training. The institute agenda was designed for participants to not only receive 15 hours of CE but also give them plenty of time to explore Rome and other nearby historical sites.

Participants came from 16 U.S. states and seven countries, including Israel, Panama, Singapore, and Saudi Arabia. Class sizes were small, allowing for close interaction both during the sessions, and on the streets of Rome.

Feedback from our participants showed that they were thrilled that AAMFT went international and are already looking forward to attending our next international event. 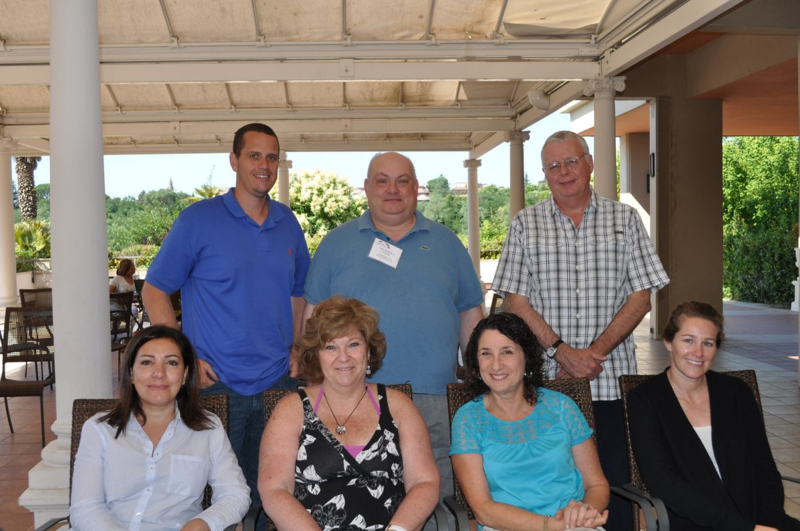 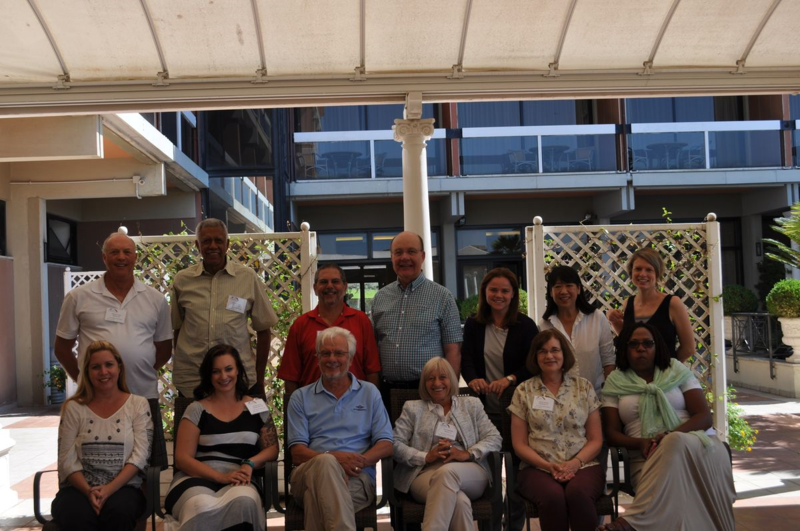 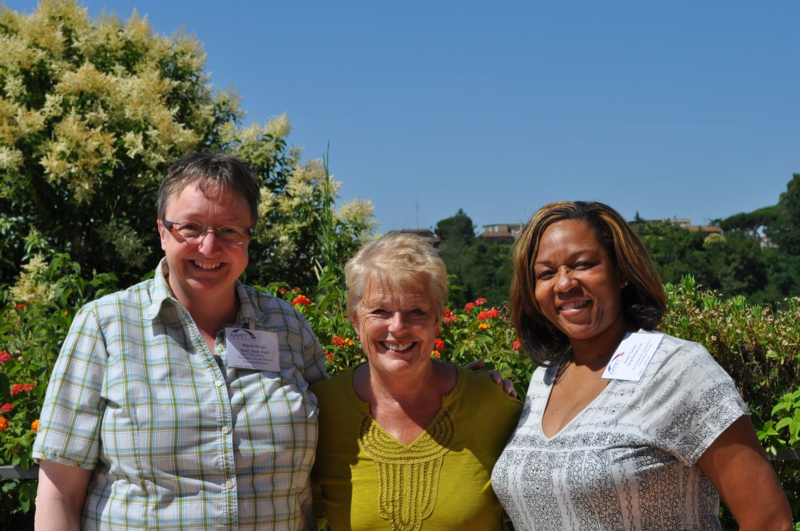 Mary Hotvedt, "The Science, Art, and Ethics of Transcultural Therapy" 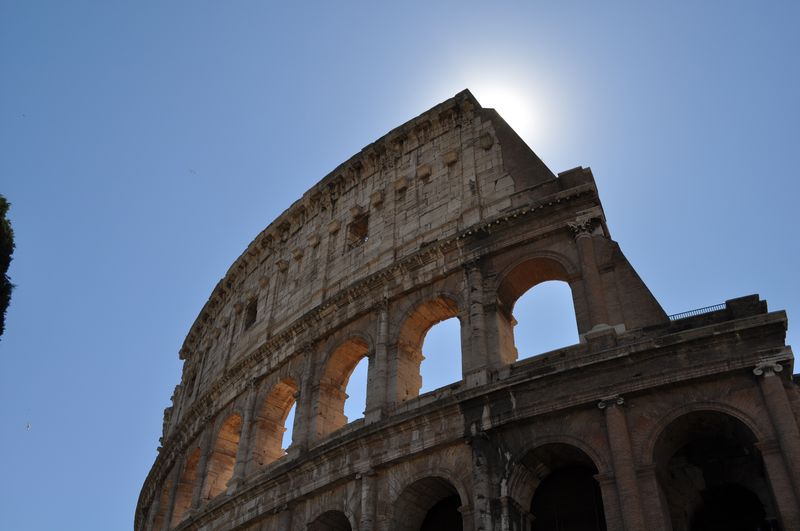 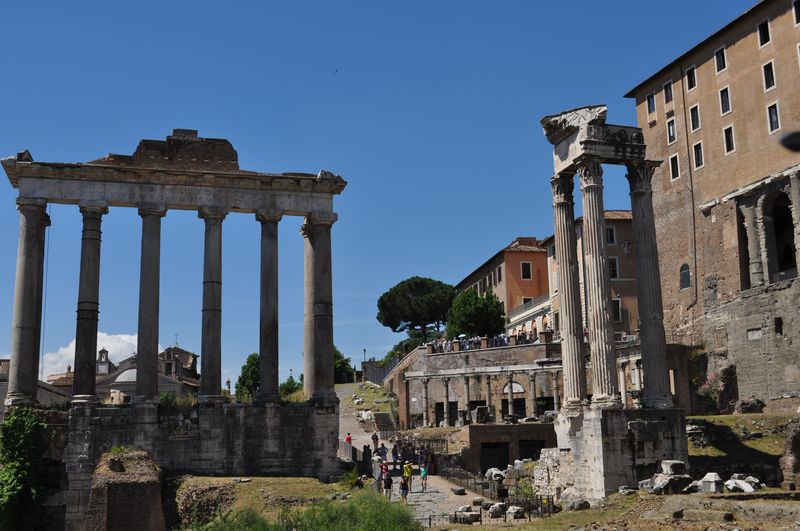